Week ending 28th-29th November saw Dorset at home to Surrey. Dorset were in need of a win to restore some belief after our bad defeat at the hands of Nottinghamshire, but at least this time we had the home advantage last time we played Surrey we were at their venue and the Men's A lost the last 5 games in a row to lose 17-19, we were hoping and expecting a better result this weekend. So how did we do?

Up 1st for the ladies Julie Boggust who took her game to a deciding leg which she lost. Up next Cath Campbell hit a 19.23 average and was our lady of the match followed by losses from Donna Mabbatt and Abi Northover who played her best game so far for Dorset taking it to a 5th and deciding leg it was only nerves and experience that cost her the game both of which will come in time. A win from Katie Mitchell 3-0 earned the second point of the weekend, however a loss from our ladies captain Sally Old put us 2-4 behind.

Men's B team. Robbie Morris always gives his all and looks at home up on the stage and won 3-0 followed by Robbie Martin (who came down from the A as he was struggling a little). Robbie played well hitting a 26.61 average and winning 3-1, up next Richard Gomm who hit a 27.87 average but lost out to Surrey's Man of the Match Shane Edwards who hit a 28.29 average to take the game 3-1. Next for Dorset James Lane an exciting youngster and a nice find for Dorset who won hitting a 26.84 average winning 3-0, next losses for Alan Ayres and Dan Walker who were far from their best. A nice win from our team manager John Clark who was our Man of the Match hitting a 27.83 average winning 3-0 put the men's B back in front at 4-3, next Richard Hutley who lost followed by Matty Woodhouse whose game went to a deciding leg which he won. Next Daniel Perry who despite hitting a 24.95 average lost 0-3, Matt Yarrow up next played well looking as always at home on the stage and loving it won 3-1 which left Graham Inniss on last to get the Men's B a win, his game going to a deciding leg which he lost, the match had some great finishes. The match ended 6-6 so going into Sunday we were trailing the scores standing at Dorset 8 Surrey 10.

Sunday what a difference a day makes or so the song goes. Up 1st Claire Rogers who lost 1-3 followed by Sarah Chick who was our lady of the match winning 3-2 with a 19.98 (Sarah pleased to get the win disappointed with her average bless) Sarah played Apylee Jones, next Suzy Trickett who won 3-0 but then losses for Julie Frampton who played Tricia Wright (who was Surrey's lady of the match) Trina Perry and Peri Yarrow meant Dorset ladies lost 2-4. So the men's A needed to win 8-4 to get a draw. Anything is possible.

Up 1st Thomas Chant who won 4-1 followed by by Matt Read who played his mate Dave Webb but as Matt said you can't have mates on stage, he won 4-2 next Nigel Lamb who despite hitting a 25.11 lost too Dave Parletti (who was Surrey's Man of the match with a 28.96 average) next wins for Mark Grimes (26.05), Lee Edwardson (24.44), Lee Turle (25.88) and Dale Masterman (25.61) put Dorset for the 1st time in front leading overall 16-15 unbelievable then a loss by Steve Penney made the match all even with 4 to play. Could we get the win? Wins for Mark Porter, Kevin Smith (coming from behind to win his game 4-3), Ryan Gowans (25.85) winning 4-1 pushed us over the winning line and still to come Champion of the World Scotty Dog Mitchell, (never get bored writing that) who played like we all know he can winning 4-0 with a man of the weekend 29.91 average.

What a team result and as for the Men's A some say unbelievable I know what our players can do and Dorset got the win they needed and deserved now we've got to wait until weekend ending 16th/17th January before we can do it all over again I hope away to Derbyshire. Green Army marching on and winning. 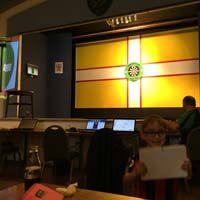 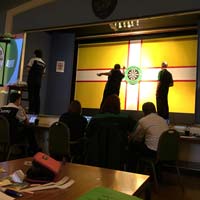 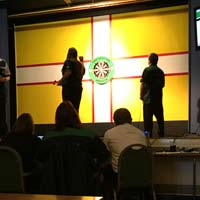 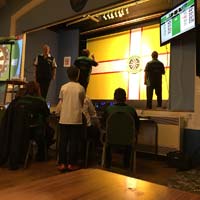 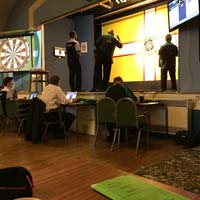 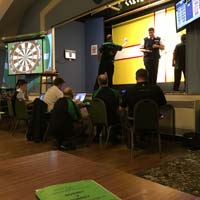 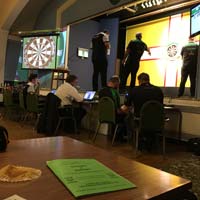 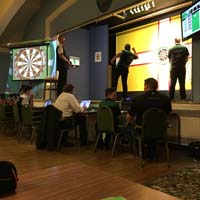 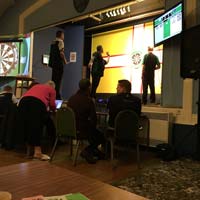 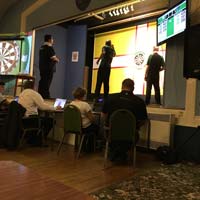 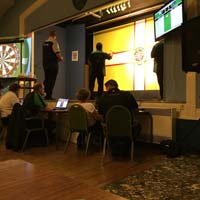 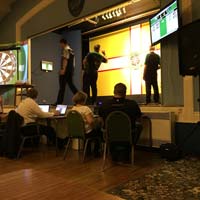